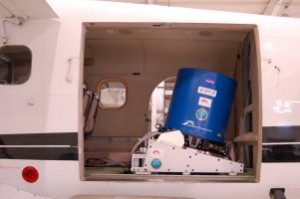 The JPL Carbon Dioxide Laser Absorption Spectrometer is an aircraft instrument for measuring the integrated column content CO2 beneath an aircraft. It does this using a technique called Differential Absorption in which two, invisble, eye-safe lasers are transmitted from the instrument down to the surface where they are reflected back to the instrument and the power of each measured. One of the lasers is absorbed by carbon dioxide while one is not such that the difference in power received can be used to determine the amount of carbon dioxide in the atmospheric column beneath the aircraft. The instrument has been flown on a Twin Otter DHC-6 aircraft and is being prepared for flight on NASA's DC-8 aircraft.