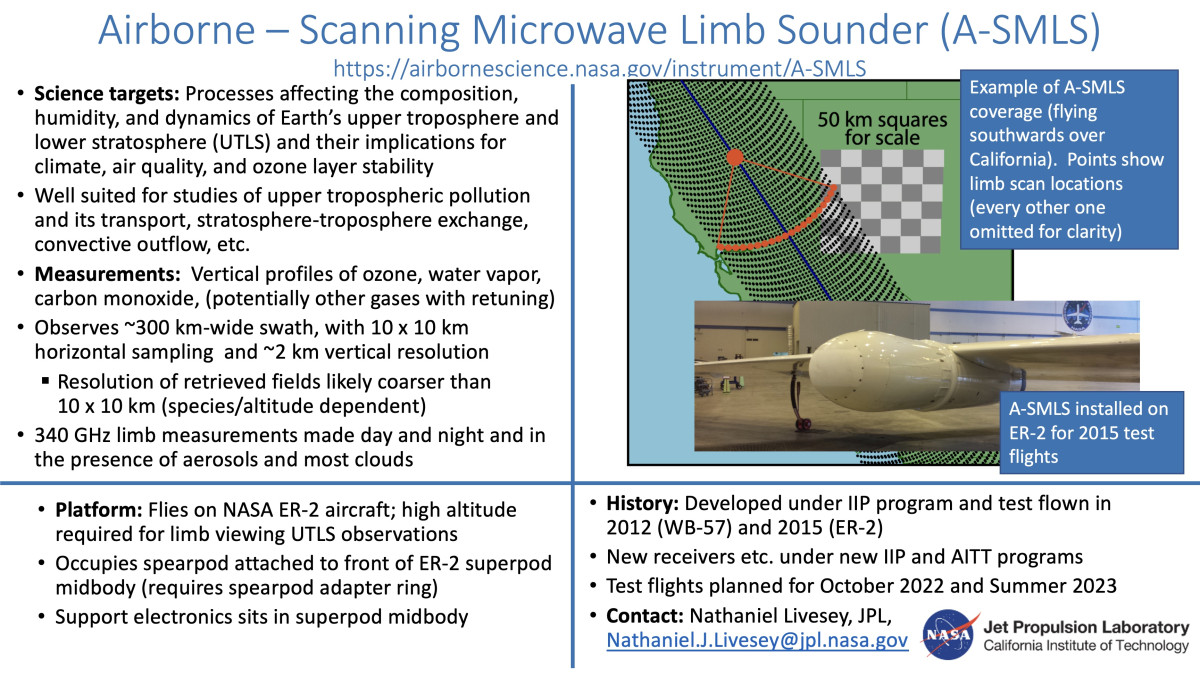 A-SMLS is an instrument designed to fly onboard the NASA ER-2 aircraft, making wide-swath vertical profile observations of the composition of the upper troposphere and lower stratosphere (UTLS, ~10 – 20 km altitude) at 340 GHz. Observing a ~300km-wide swath ahead of the aircraft in a 2D raster scan (azimuth and elevation), A-SMLS is designed to measure water vapor, ozone, and carbon monoxide with a 10 x 10km horizontal resolution (across and along-track). See Table 1 for more details on the key A-SMLS capabilities and parameters.

A-SMLS is ideally suited to provide high spatial resolution measurements of UTLS composition needed to improve our understanding of key atmospheric processes including:

As such, A-SMLS observations from the ER-2 will prove to be a valuable asset in future multi-instrumental field campaigns, e.g. utilizing the wide swath to provide context for more detailed in-situ measurements by aircraft in the stratosphere or at lower altitudes.

Additionally, A-SMLS presents a unique opportunity as a pathfinder for future MLS class instruments, using the latest generation receivers and spectrometers to demonstrate these technologies in advance of them being proposed for future spaceflight opportunities.

A-SMLS was originally developed under NASA’s Instrument Incubator Program and flew on the WB-57 aircraft in July and September 2012. This version of the instrument used 4 K-cooled superconducting microwave receivers, requiring a liquid Helium-filled dewar. The instrument was subsequently adapted for the NASA ER-2 aircraft, on which it flew in March 2015.

A-SMLS was recently updated to use new 340 GHz microwave receivers that can operate both at room temperature and at cryogenic temperatures. A new mechanical cooler was installed to hold the receiver at ~70 K, removing the need for liquid helium cooling. Upgrades to the mirror pointing system and pilot instrument control and aircraft telemetry interface are underway. Test flights of this new configuration are planned for Summer/Fall 2023.

a Currently, with the 3-GHz wide spectrometers, observations of some of these molecules require minor
instrument retuning.