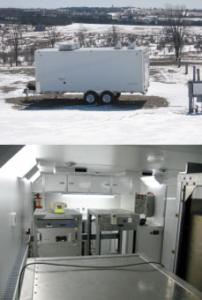 The utility of millimeter-wave radars have been successfully used for cloud sensing and cloud microphysical studies. Studies of the impact of cloud feedbacks on the earth's radiation budget have underscored the importance of having a means of measuring the vertical distribution of clouds. Millimeter-wave radars can provide this information under most conditions, with high resolution, using a relatively compact system.

The Airborne Cloud Radar/CloudSat Validation Radar (ACR/CVR) for profiling cloud vertical structure was developed by the Jet Propulsion Laboratory and the University of Massachusetts in 1996. It is a W-band (95 GHz) polarimetric Doppler radar designed as a prototype airborne facility for the development of the 94 GHz Cloud Profiling Radar (CPR) for NASA CloudSat mission.

The ACR/CVR is a third-generation millimeter-wave cloud radar. While adopting the well tested techniques used by its predecessors, ACR/CVR also has a number of new features including an internal calibration loop, frequency agility, digital I and Q demodulation, digital matched filtering, and a W-band low-noise amplifier.