The NASA Earth Venture Suborbital 2 Oceans Melting Greenland (OMG) completed the sixth and final Airborne Oceanographic Survey in Greenland on 22 September.   A total of 350 temperature and salinity dropsondes were deployed on the continental shelf around Greenland from the JPL subcontracted DC3 Turbo Prop Aircraft from Kenn Borek Air, LTD of Calgary, Canada.  In addition to the dropsondes, a total of 18 robotic satellite based drifter and floats were deployed from the open door of the aircraft, and provide months to years of data of temperature and salinity. 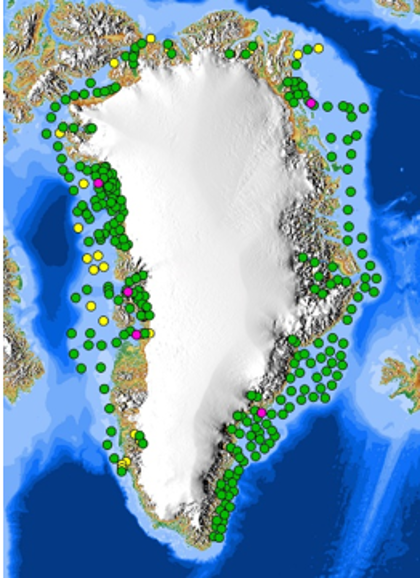 Map showing all of the locations that dropsondes were deployed in green, and floats
and drifters in purple, and a few yellow locations were floats were planned but not deployed.

The final week of the OMG 2021 campaign was a coordinated outreach effort between NASA, the US State Department and the Greenlandic Government. There was a number of science outreach programs with the OMG team at local Greenland High Schools, including aircraft tours. Additionally, there was a number of VIP flights for the Greenlandic Government and Research community and the US State Department. The outreach effort by the OMG team was well received by the Greenland officials.