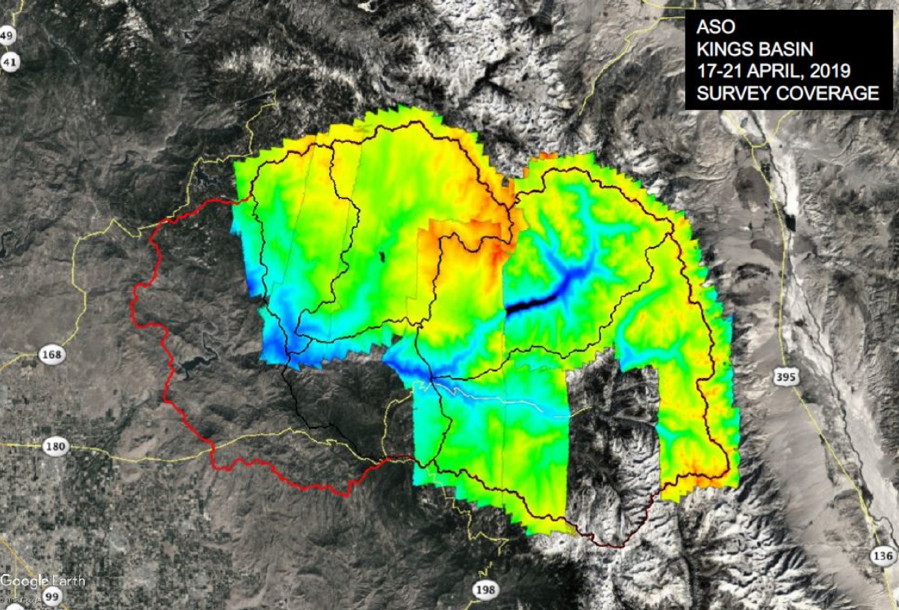 Map of ASO lidar coverage of the Kings River basins during 17-21 April.

The 2019 GLISTIN Campaign over Greenland has been successfully completed on the JSC Gulfstream III aircraft.   All glacier targets were successfully collected in Greenland.  We conducted three science flights out of Thule, Greenland covering the coastal glaciers in northern Greenland and western Greenland south of Thule.

After successfully completing the second leg of the OMG GLISTIN-A Greenland campaigns, the team left Greenland for Grand Forks, ND on Tuesday, 16 April and mapped the Red River floodplain again for researchers at University of New Hampshire to improve their flood prediction model.

ASO completed a snow survey of the Merced River basin on 29 March.  This work is performed in partnership with the California Department of Water Resources.

ASO performed snow survey flights over portions of the San Joaquin river basin, Kings River basin, and Kaweah River basin on 15-17 March.  These snow surveys are performed in partnership with the California Department of Water Resources. 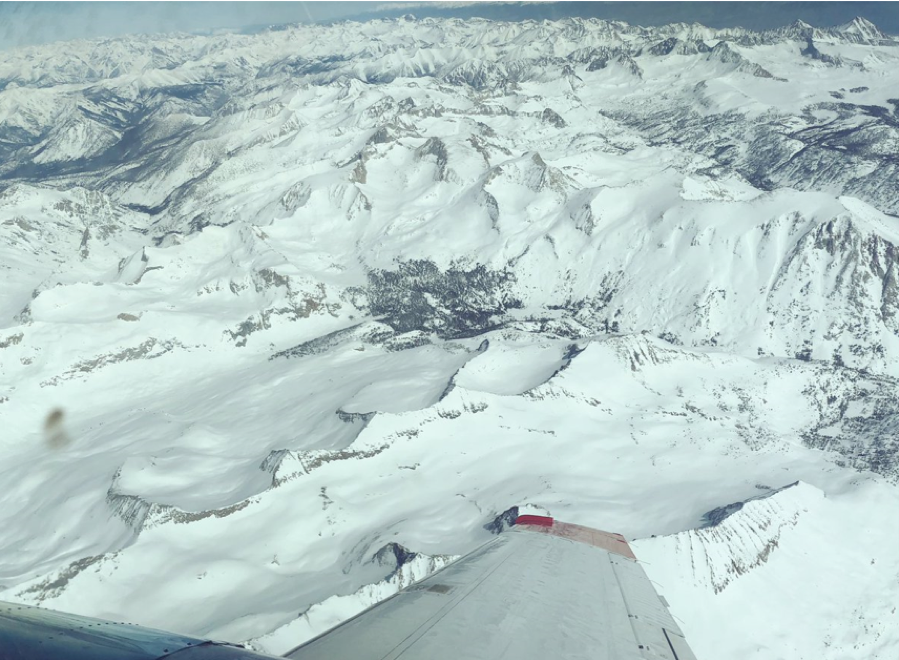 The 2019 GLISTIN RADAR Campaign was flying from Keflavik Iceland all of last week, and successfully completed all of the flight lines in Southern and Eastern Greenland.  The aircraft transited to Thule Air Force Base in Greenland on Monday, 20 March for flight in Northern Greenland.

ASO conducted a successful survey of the Lakes Basin near Mammoth Lakes, CA on 9 March.  This marks the first snow survey of 2019.

The L-band radar aboard the AFRC G-III conducted its first flight of the 2019 on 19 February.  The AFRC G-III had just returned from a major cockpit upgrade.  Both the aircraft, including the platform precision autopilot, and the radar checked out well.  Thursday we will begin a series of California local science flights.

The Ka-band radar pod will be installed aboard the JSC G-III early next week in preparation for the Oceans Melting Greenland mission’s Greenland deployment.  This will be our fourth annual visit of the coastal Greenland glaciers.

The L-band radar aboard the AFRC G-III aircraft flew over the Woolsey and Hill fires in Southern California on 15 November as part of the NASA response to the fires.  The flight was at night to stay out of the way of firefighting aircraft in the area.  We also carried a FLIR thermal camera (7.5-13.5 um) supplied by the Mobility and Robotic Systems Section of JPL.   Andrea Donnellan (JPL) has been developing a camera mount system to co-collect optical imagery with SAR data.  We plan to use the thermal camera imagery to attempt to match the active fire front with the SAR imagery.  We flew two existing flight lines that are part of a much larger study understanding regional tectonics (i.e. San Andreas fault) and landslides.  Data from this flight will also serve as a baseline post-fire land surface for studying the landslide and debris flow risks of areas where vegetation was removed by the wildfire.

A JPL press release of the NASA fire response effort can be found here:

The Next Generation AVIRIS (AVIRIS-NG) has been conducting an airborne survey of methane sources in California.  Last week there was a coordinated flight with the Scientific Aviation Mooney aircraft (Tail Number N2123X) over sites in SF Bay Area.   The Mooney aircraft has in situ methane gas analyzers and performed low level spirals above methane sources, while the King Air flew at 10,000 ft with the AVIRIS-NG to remotely sense the sources areas.