ASO completed April 2018 California snow surveys in the San Joaquin, Tuolumne, Merced, and Kings river basins last week.  The ASO team delivered data products for San Joaquin and Tuolumne within one week of completing data acquisition for each basin.  The snow depth, snow albedo, and snow water equivalent data from these surveys will be used by California Department of Water Resources and local water agencies to make key water supply decisions for the remainder of the year.

The Airborne Snow Observatory completed a survey mission 30 March to 1 April to measure water content of snowpack in the Gunnison River basin in southern Colorado.  This data will be used by Colorado water resource managers to optimize storage and distribution of water for the upcoming summer months. 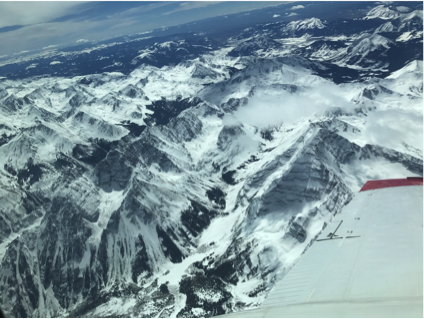 View of the Gunnison Basin from the ASO airplane just south of Aspen, CO 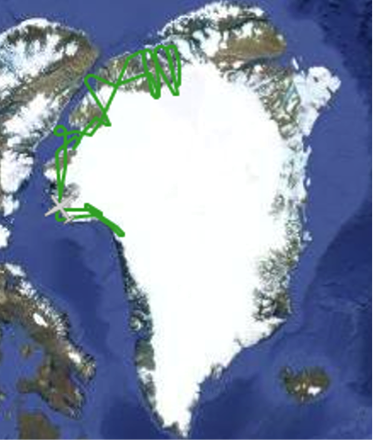 OMG’ North Western science flight track below is from 19 March. 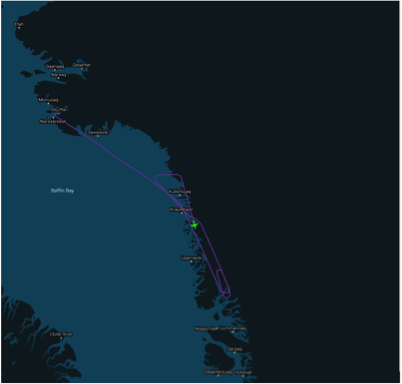 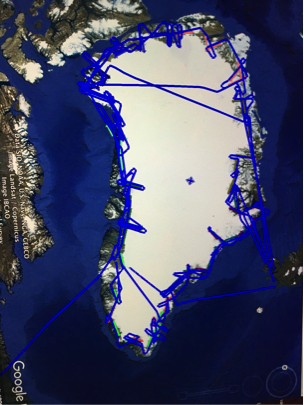 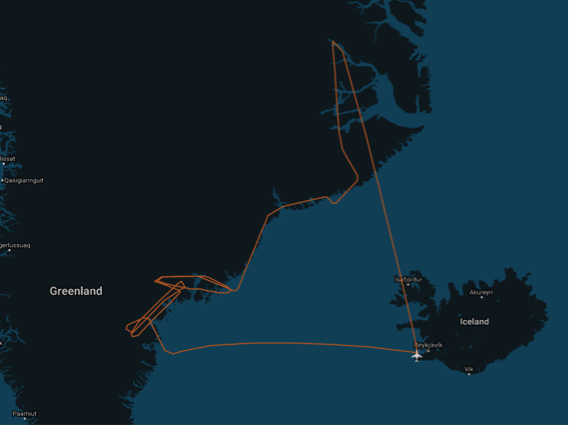 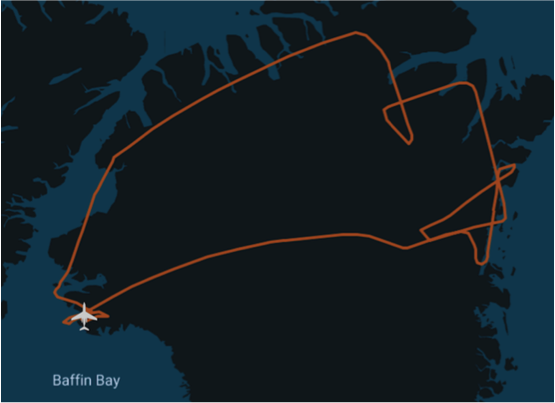 The Ka-band radar (GLISTIN-A) has successfully completed the Oceans Melting Greenland (OMG) deployment aboard the JSC G-III.  Kudos to the aircraft crew and radar team for an excellent job and the mission was completed two days ahead of schedule.  In all we acquired 81 science flight lines (100%) and 3 calibration lines over sea ice and preliminary assessment showed the radar data looked good.

The Ka-band radar (GLISTIN-A) is more than half way through its Oceans Melting Greenland (OMG) Greenland deployment aboard the JSC G-III.  So far we have acquired 50 out of 81 flight lines in 6 science flights.

On 6 March, GLISTIN- A flew from Bangor, acquired radar data from 3 science flight lines, and landed at Kanger, Greenland. 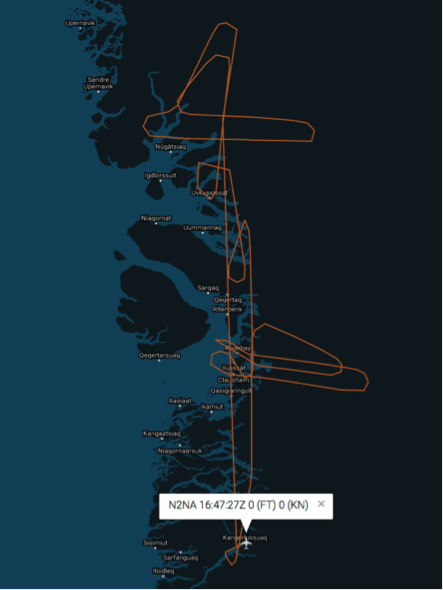 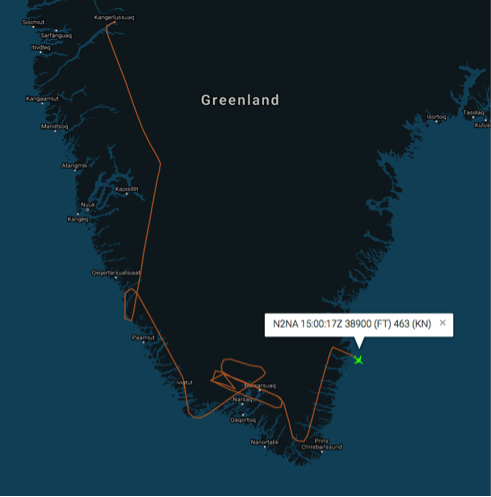 The following press release was issued on 2 February, 2018:

AirMSPI flies in the nose of NASA's high-altitude ER-2 aircraft. The instrument was built by JPL and the University of Arizona under NASA’s Instrument Incubator and Airborne Instrument Technology Transition Programs, and is aimed primarily at remote sensing of the amounts and microphysical properties of aerosols and clouds.

The AirMSPI Level 2 Cloud Droplet Size and Cloud Optical Depth Data Product contains a droplet size distribution (DSD), parameterized by an effective radius (reff) and effective variance (veff) of a gamma size distribution, as well as a spatially resolved cloud optical depth (COD) at 470, 660 and 865 nm. These L2 products are derived from L1B2 radiometric and polarimetric data taken in the instrument's continuous sweep mode with 25 m spatial sampling. Along with the L2 products, their retrieval uncertainties are reported, as propagated from the relevant uncertainties in instrument radiometry and polarimetry. Files are distributed in NetCDF4 format.

This release of AirMPSI L2 data contains targets over ocean acquired in sweep mode during the ORACLES flight campaign, including the check-out and transit flights. ORACLES was based out of Walvis Bay, Namibia and focused on the South Atlantic Ocean off the coast of Namibia and Angola. AirMSPI L2 data were acquired from 3 August to 29 September, 2016. More details about the ORACLES campaign and AirMSPI participation can be found at https://espo.nasa.gov/oracles.

Information about these products, details about product quality, and mechanisms to access the data can be found under AirMSPI Data and Information at the ASDC website, https://eosweb.larc.nasa.gov/.

The Classic Airborne Visible and Infrared Imaging Spectrometer (AVIRIS-C) and Portable Remote Imaging Spectrometer (PRISM) are deployed with the NASA ER2 to Marine Corps Base Hawaii (MCBH) on the Island of Oahu.  The mission has conducted most of the flights for Coral Reefs targets and has had successful day/night ASTER underpasses for studying the volcano and volcanic gas plume.

The Classic Airborne and Visible Infrared Imaging Spectrometer (AVIRIS-C) and the Portable Remote Imaging Spectrometer (PRISM) are both deployed on the NASA ER2 to Marine Corps Base Hawaii (MCBH) on Oahu. The campaign is the HyspIRI HyTES Hawaii Campaign (H3C) and there have been collections over both the Big Island Volcano targets and coral reefs in the main island chain.

AirMSPI took part in the Aerosol Characterization from Polarimeter and Lidar (ACEPOL) field campaign, which took place from 19 October to 9 November with the NASA ER-2 high altitude research aircraft flying out of the Armstrong Flight Research Center (ARFC) in Palmdale, CA. 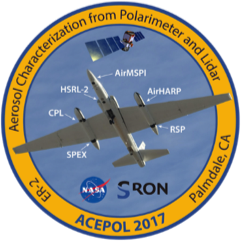 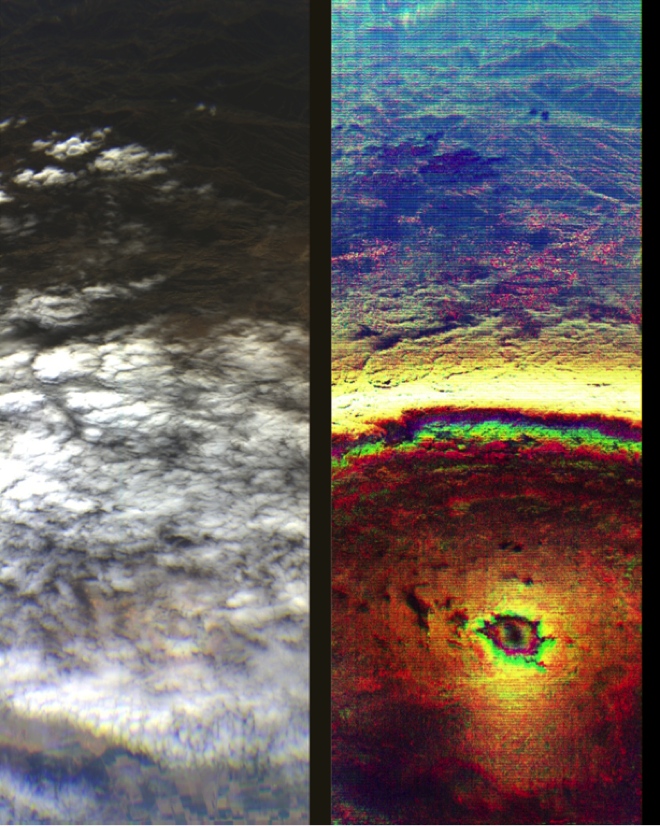 (Left) AirMSPI red/green/blue image of liquid water clouds over land (Right). Same image in degree of linear polarization from the near-infrared/red/blue bands. The small, circular feature is the glory and the larger, bright white arc is the cloudbow. The size, location, and brightness of these features provide information on cloud microphysics.