AirMSPI just completed deployment in the FIREX-AQ/ER2 field campaign flying on the NASA ER-2 high-altitude research aircraft. A total of 12 flights occurred between 1 August and 21 August over fire and smoke targets in Oregon, Washington, Idaho, Montana, California, Utah, and Arizona, as well as the Railroad Valley calibration site in Nevada. A number of these flights were coincident with the NASA DC-8 aircraft and a NOAA Twin Otter aircraft that flew sampling missions into the smoke. Other objectives were coordination with NASA and NOAA satellite overpasses and overflights of ground-based sampling sites.

On 16 August, AirMSPI acquired images of pyrocumulus clouds over the smoke from the Sheridan Fire in Arizona that to date has burned over 13,000 acres in central Arizona near the city of Prescott. The three AirMSPI quicklook images show the smoke and clouds in both intensity and polarized light. The left image shows the scene as it would appear to the human eye, with the brown smoke to the top of the image and white clouds forming over the smoke to the bottom of the image. The middle image incorporates the near infrared band, which can see through some of the smoke to the fire below, which appears as bright red. The right image shows the degree of linear polarization (DoLP) of light in the three polarized AirMSPI spectral bands in the blue, red, and near infrared. In this case the smoke appears greenish-yellow because the small particles in the smoke highly polarize the scattered sunlight. The larger liquid water particles in the cloud do not polarize the scattered light very much in this viewing geometry, so the cloud appears black. AirMSPI’s multi-angle views can also be used to reconstruct the vertical structure of the smoke and the cloud using stereophotogrammetric techniques.

OMG had another successful week of flights.  The Basler (N131PR) was based in Kangerlussuaq for Airborne eXpendable Conductivity and Temperature Depth probe (AXCTD) drops in the SE region.   The aircraft then flew to Constable Point for AXCTD drops in the NE, and then flew onto Svalbard Norway.  After a few days in Svalbard, and 2 science flights, the aircraft flew to Thule Greenland.  In Thule the team accessed the 144 probes that were pre-positioned there via a DOD cargo ship in July.  To date, the mission has dropped 154 AXCTD probes.

The media coverage of OMG continues with these news segments:

OMG has been deployed to Greenland for the 2019 Airborne expendable Conductivity and Temperature Depth-probe (AXCTD) campaign.   The flights are occurring on the AIRTec/Basler BT-67 aircraft (Tail Number N131PR).  To date, 100 AXCTD probes have been dropped in Eastern Greenland, and 10 probes dropped in Southwest Greenland.   The week of 12 August was OMG media week in Kulusuk Greenland.   Eight international media outlets participated in the flights from Kulusuk, including NBC/Today, CNN, CBS, AP, AFP, ITN, CBS and National Geographic.  On 20 August, the aircraft departed Kulsusuk and headed for Kangerlussuaq for drops on the SW coast of Greenland.  The following coverage has been posted:

The mission can be tracked at https://airbornescience.nasa.gov/tracker/. 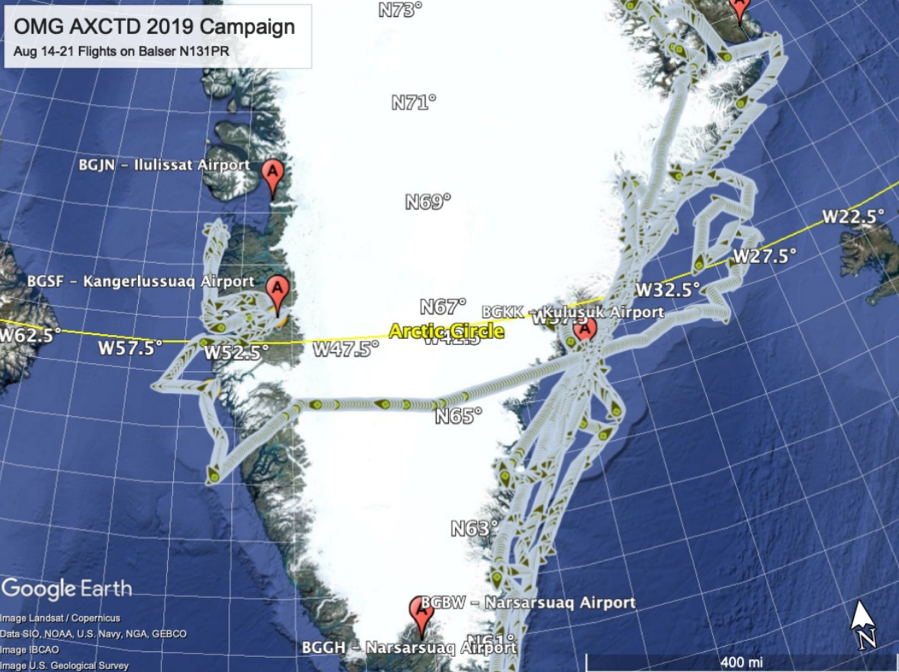 The 2019 OMG Airborne eXpendable Conductivity and Temperature Depth Probe (AXCTD) campaign is underway in Greenland.  The AIRTec Inc. On 10 August the aircraft departed Goose Bay and arrived in Greenland.   Science operations began on 12 August with a successful day of 10 AXCTD drops, and ITN/Channel 5 participated in the flight as part of the media event.  Al Roker from The NBC Today show flew on the 13 August science flight.   The Weather Channel and Associated Press will fly on 14 August. There have been 30 AXCTD probes dropped as of 13 August. 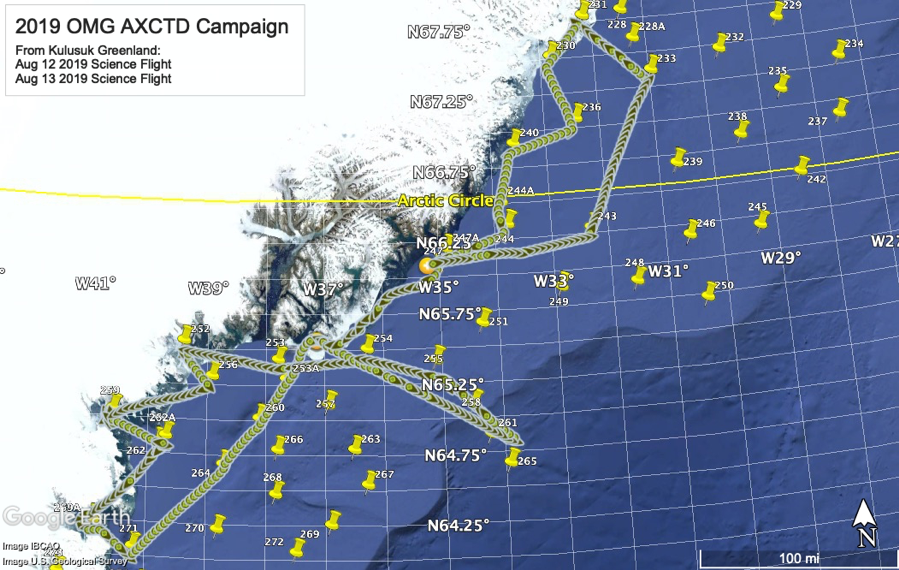 AirMSPI continues to support the FIREX-AQ/ER-2 field campaign. To date, about 40 hours have been flown resulting in many good fire acquisitions including the Williams Flats Fire near Spokane, WA.  Coordination between the ER-2 and the NASA DC-8 aircraft has also been achieved as both aircraft worked this fire last week.

ASO completed the last snow surveys of the 2019 California snow year.  The ASO team surveyed the Kings River basin on 27-29 July and the San Joaquin River basin on 1-2 August.  The data will be processed with Level 4 snow products this month.

On 30 July, the ASO team completed an airborne survey of the Sagehen experimental forest in Northern California.  This task is led by Dr. Jonathan Greenberg of University of Nevada Reno, under the NASA Carbon Monitoring System program. 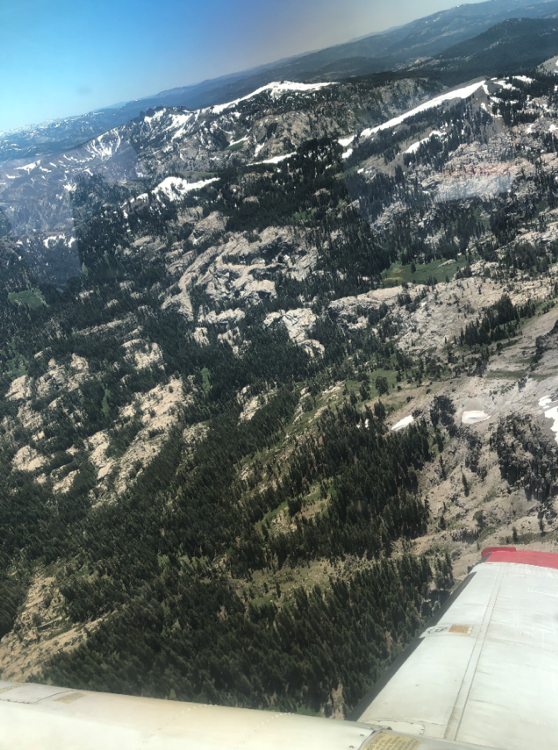 The Sagehen experimental forest as seen by the ASO plane on 30 July. 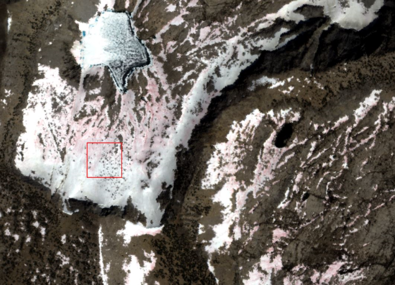 The P-band radar aboard the AFRC C-20A (NASA802) successfully completed imaging of the complex terrain soil moisture in the Mammoth area on 26 June.  In addition, we conducted a science demonstration flight imaging landslide area in Northern California as well as the densely vegetated Long Valley caldera (a large volcanic complex in eastern California) to study the use of P-band DInSAR (differential interferometric SAR) techniques over areas that typically decorrelates in L-band imagery over a short time period and deep-seated landslides.

The M6.4 and M7.1 Searles Valley earthquakes on 4 and 5 July respectively generated many requests for satellite and airborne DInSAR data to observe ground deformation along known and previously unknown faults during and after these major earthquakes.  UAVSAR acquired data over China Lake back in 2008, an area to the southeastern end of the fault rupture.  We have been asked to plan some future UAVSAR flights to image the China Lake area as well as the main fault rupture.  UAVSAR data complement satellite SAR observations by imaging the affected area from different viewing geometry.  The first UAVSAR flight is planned for late July.

The HyTES European campaign successfully ended on 30 June with a local flight near Duxford, UK.