The L-band radar aboard the JSC G-III has successfully completed the spring 2021 Delta-X campaign.  In all we conducted 9 flights over 3 different regions of Atchafalaya Bay in Louisiana between 27 March and 18 April totaling 51.2 hours.  These nine flights were flown over a range of tidal conditions to capture the wetlands at different water level heights.  The Delta-X science team will be using UAVSAR phase difference imagery from adjacent flight lines to determine water level change in wetlands.  This information, along with other airborne and in-situ data, will help them calibrate their hydrology and sediment transport model to predict long-term soil accretion at the delta under projected relative sea level rise, river discharge, and sediment supply.

2021 Delta-X campaign.  AirSWOT flights were based out of New Orleans and they successfully executed 10 flights between 26 March and 18 April, totaling 56 hours.  Except for the first training flight, AirSWOT and UAVSAR imaged the delta region at the same time.  AirSWOT instrument will provide water-surface slope in the delta channels to the Delta-X Science Team. 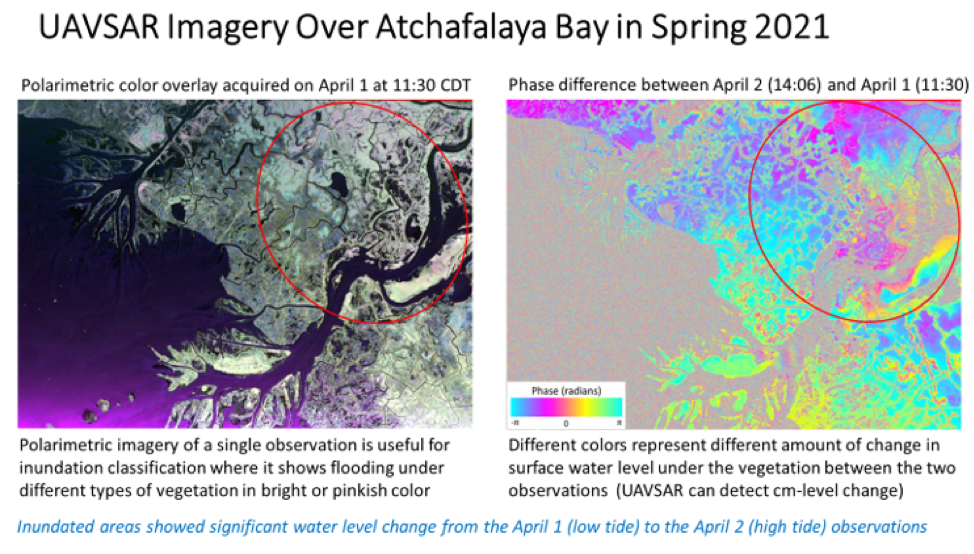 On 7 April, UAVSAR and AirSWOT imaged Terrebonne West with the Louisiana State University (LSU) field teams in the Fourleague Bay area at intensive study sites 322 and 399.  UAVSAR collected 16 lines (8 times the same 2 flight lines).  AirSWOT collected 22 lines.  Conditions were too cloudy for AVIRIS-NG to collect data.  The LSU Island team measured flow velocity at site 399 at 10:00 AM and 3:30 PM. The LSU ADCP team took the 10 planned ADCP transects around site 322 then sites 399.

On 11 April, the BU Water Quality team traveled 66 miles on the water all the way across Fourleague Bay, collecting water samples and radiometry along the way.  The ADCP team finished all planned transects in the afternoon. These transects successfully concluded all planned ADCP measurements (i.e. water flow in channels).

AVIRIS-NG departed Louisiana on 11 April after successfully completing its part of the Delta-X campaign, collecting all vegetation lines across the Atchafalaya and Terrebone basins and several data collections for water quality across a variety of tidal states.

Delta-X has successfully been running as planned with it first set of flights over the Mississippi River Delta floodplain by Delta-X triplets: UAVSAR, AirSWOT and AVIRIS-NG on Saturday, 27 March (See quick-look images from UAVSAR and AVIRIS-NG).

As of 6 April, AirSWOT and UAVSAR flew simultaneously (~5 hours) 3 times over the Atchafalaya Basin and twice over the Terrebonne Basin.  The basins are located in the land growing and losing parts of the floodplain respectively.  AVIRIS-NG flew simultaneously to the radars and did a few more solo flights to extend coverage of wetlands.  During each of their ~5 hours of flight, the UAVSAR continuously repeats 2 flight lines 8 times and the AirSWOT system repeats 7 flight lines 3 times.  The repeated imaging of the same flight lines was designed to capture the propagation of the tidal wave, through InSAR, across the floodplain.  While the radar provide measurements to determine the flow of water, AVIRIS-NG, an imaging spectrometer, tells us what is in that water.  The combined airborne and field measurements will be used to calibrate a hydrodynamic model used to forecast the vulnerable and resilient part of the Mississippi River Delta (more info here: https://deltax.jpl.nasa.gov/ ). 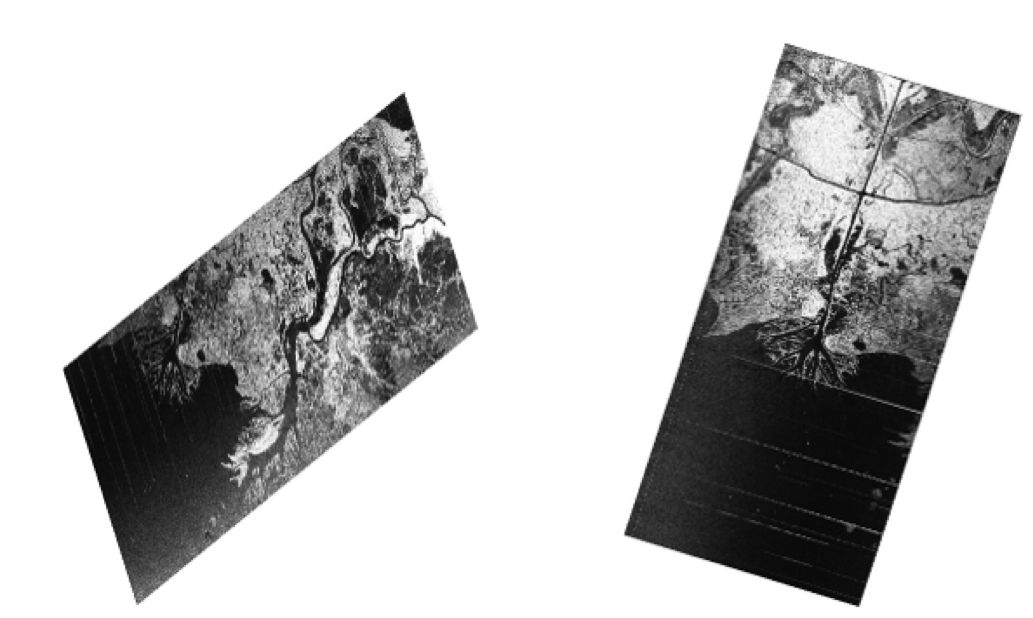 10 full days of Acoustic Doppler Current Profiler measurements
along transects crisscrossing river channels of the regions. They
are used to estimate bathymetry and flow of water in the rivers

The L-band radar aboard the JSC G-III has successfully completed the last of the weekly SnowEx observations today (March 22).  In all we conducted 10 weekly observations, missing only one week in mid-February when extreme freezing temperatures in Texas causing widespread power outage throughout the state, where UAVSAR is currently based.  The UAVSAR processing team back at JPL has been generating polarimetric interferograms of data acquired on adjacent weeks.  Attached is an example interferogram over Lowman, Idaho of data acquired on February 3 and 10 respectively.  The interferometric phase maintained pretty high coherence over the 7-day temporal separation.  The color variation is a result of difference in snow accumulation between the mountain ridges and the valleys.

Delta-X has started the Spring 2021 high discharge campaign in the Mississippi River Delta.  The campaign comprises 3 airborne instruments (AVIRIS-NG, AirSWOT, UAVSAR) and multiple in situ ground teams.   The campaign began on March 21, 2021 with the Delta-X Vegetation Team made up of team members from Louisiana State University and Florida International University.  AVIRIS-NG, AirSWOT, and UAVSAR will begin Delta-X science flights around March 27, pending favorable weather conditions.  The Delta-X Spring campaign will continue through mid-April 2021.

The L-band radar aboard the JSC G-III has been conducting weekly SnowEx observations since January 15.  Each weekly observation consists of a 9-hour flight with a fuel stop in Idaho in order to visit 6 sites in Utah, Colorado, Idaho, and Montana respectively.  So far we have successfully executed 7 flights, missing only one week in mid-February when extreme freezing temperatures in Texas causing widespread power outage throughout the state, where UAVSAR is currently based.  We expect to conduct 2-3 more flights before we wrap up the SnowEx campaign.

Friday’s long flight day over the Rockies covered 6 sites: Little Cottonwood in Utah, Cameron Pass, Fraser, and Senator Beck in Colorado, and Central Agricultural Research Center (CARC) in Montana.  Both the aircraft’s PPA (platform precision autopilot) and the radar performed well and the aircraft landed at Ellington Field, TX with a fuel stop in Idaho.  The aircraft will be based out of Ellington Field to conduct the weekly SnowEx observations from now through mid-March.  Nominally the SnowEx observations will be conducted on Wednesdays, with Thursdays and Tuesdays as backup days.  The radar operator will be stationed in Houston for 3 weeks at a time to minimize commercial travel to/from Houston and Los Angeles.

The L-band radar is being installed on the JSC G-III this week in preparation for the SnowEx campaign.  Engineering/Rosamond Corner Reflector Array calibration flight is scheduled for Wednesday (1/13) and science flights will begin this Friday from Palmdale, CA en route to Houston, TX.  The SnowEx campaign will consist of weekly observations of snow accumulation over field sites in the Rockies with different terrain and snow types through mid-March, where each observation consists of a ~9 hour flight based out of Houston, TX with a refuel stop in Idaho.  In all there are 7 sites in 3 states: Little Cottonwood in Utah, Cameron Pass, Craser, Senator Beck, and Grand Mesa in Colorado, and Central Agricultural Research Center (CARC) in Montana.  The imaging swaths are shown in the attached graphic.

The SAR-Fusion QUAKES-I side imaging SWIR camera was flown over the northern California LNU Complex, River CZU, and Bobcat fires with the UAVSAR flights on September 3, 9, and 18, 2020 respectively. Optical images were collected out the left window with a full frame camera. The 12.5 km altitude flown for UAVSR and side imaging are useful for situational awareness above the firefighting aircraft. Visible images show the smoke plume while short wavelength infrared (SWIR) imagery sees through the smoke and shows the fire hotspots. An optical science window was installed for the Bobcat fire flight and optical images taken through the plexiglass and optical windows show the improved quality for the optical window.